Many thanks to my friend, Sheila Jones who contributed a guest post about her experience in Orange, TX and the survivor’s struggle to move on.
This is what Sheila wrote:

Two years ago, when Hurricane Harvey hit the United States, the small town of Orange, TX, received 61 inches of rain in 48 hours time. It’s hard for any of us to imagine what that would be like in our town. And it was hard for residents of Orange, TX, to imagine too. Until it happened.

Their town had never flooded before. EVER. They are 40 miles inland from the Gulf Of Mexico. It was catastrophic flooding of Biblical proportions.
No person, home, or business in the small town was untouched.
Right at 80% of the homes in town flooded and were uninhabitable.
I went to Orange, TX, a short time after it happened and met the people.
When I arrived in Texas after the waters receded, I was struck by how many people were struggling just as hard as if the storm had just hit.
Not many of us completely understand the long, slow recovery process from such widespread devastation.
People in Orange, TX, told me about how all of the grocery stores within a 20 mile radius of their homes were flooded or destroyed by the storm. There was no access to food except for a two hour long trip around closed roads and washed out bridges to more distant cities.
Many grocery stores and gas stations were unable to re-open for 6 months to a year.
Jobs in the town went away. Many people had to move.
People who stayed were cut off from many of life’s basic necessities.
I was inspired, though, to listen to their stories of how they got through it.
But, still, I could see it on the faces of the children in the town. They were changed forever. The children had lost a part of their childhood, their innocence, and their lives to a storm.
Please watch this video of my visit to a local middle school in Orange, TX. This is the story of their resilient school band and how almost every student lost their home and their musical instrument in the storm.
And, how, they fought to get their lives back.
“All the sad things are going to come untrue”.
https://youtu.be/biRUSZAx5O8 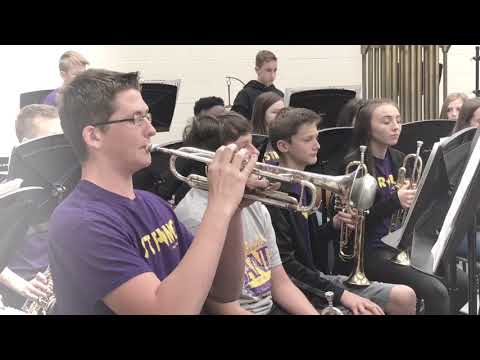